The world is full of beautiful places to travel but Dubai undoubtedly is the king of tourism around the globe due to its extremely outstanding entertainment and tourism industry and unmatchable services. Although there are a lot of tourist places in Dubai, yet tourists always face confusion about the best hotels they can have to make their stay more comfortable and memorable. Because no matter whichever places you travel or whatever tours you take, at the end of the day you need some great services of the hotel you are staying in to relax and get ready for a new day.
Along with the upraised living standards, Dubai is also known for its lavishing shopping malls, Super luxury 5-star restaurants, and exotic beaches. In short, everything is larger than life in Dubai and if you don’t stay in a five-star luxury hotel, enjoying its elegance and class then you are missing so much on your trip to Dubai.
Following are the top three Luxury Hotels in Dubai. Burj ul Arab, being considered as one of the landmarks of Dubai and is number one on our list of luxury hotels because you are not going to find any better than this. The interiors, with the atrium being surrounded on either side by towering golden pillars give you the feeling of elegance and excellence at heights. And of course, the architecture of the hotel has no match when it comes to its fashioned in the form of a giant sail rising over a thousand feet in the sky. The suites feature elaborate stairways made of marble and gold, and the beds are positioned on rotating pedestals so that you can take in a 360-degree view of the city which gives the place a whole new exotic vibe. 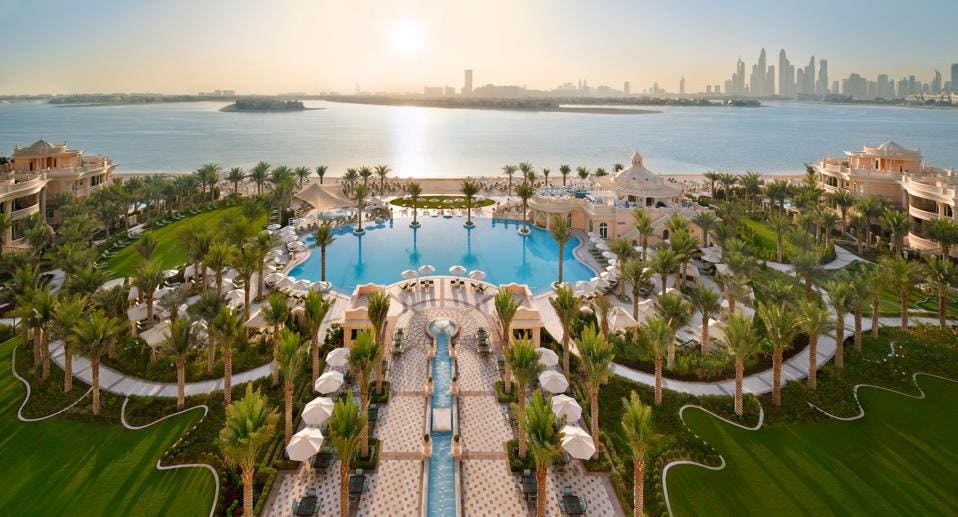 It would be a sin not to include the grand palm Dubai in the list of top luxury hotels as the palm itself is undoubtedly included in the top ten attractions in Dubai. It is famous worldwide for not only sheer beauty and charm but also peace and quietude. Despite the sheer grandness of this hotel, it feels rather like a boutique hotel with just 90 rooms, and four additional villas surrounded by lush greenery. But don’t be fooled by the limited number of the rooms as all these rooms are one of the largest rooms which are offered in Dubai. Atlantis is one of the most iconic structures in Dubai. The two towers of the hotel are connected by the Royal Bridge Suite, which is one of the most sought-after suites in all of Dubai. The interiors of the hotel also carry the aesthetic sense according to the theme of the underwater city on which it is named.
So choose any of the luxury hotel mentioned above to stay in as they don’t only have the best services and comfort levels to provide but are also considered as one of the best places in Dubai to stay. Most Romantic Spots to Celebrate new year in Dubai

Dubai isn’t just a haven for the people in search of adventure and out-of-the-world concept of entertainment. There is a... Public and Private Beaches in Dubai

Dubai’s intense temperature levels imply people are most likely to the beach after supper as well as at night. The...